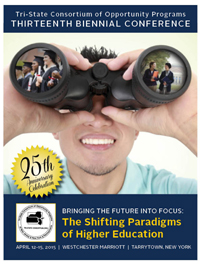 April 12-15, 2015.  The theme was The Shifting Paradigms of Higher Education and it celebrated 25 years for the Tri-State Consortium. The Conference Program (PDF) is available by clicking on the image to the right.